To become Chairman and CEO of Loud Industries

To maintain the power and wealth of the Loud family

Riding in his limo

Hanging out with his friends

Hanging out with his sisters

Having fun with Veronica

Sports games being rained out

Anyone interrupting his and Veronica's private time

"When it's game time, it's pain time for that good for nothing freeloader"

Richard L. Loud III was born on February 1, 2005. At 12 years old (formerly 11), Richard is the middle child and only son of Lucio Loud and Margaret Loud and a member of the prominent Loud family of Royal Woods, MI. Like Lynn Loud from The Loud House, Richard has an annoying habit of turning everything into a sport. He is named after his grandfather, Richard L. Loud Jr.

Richard is a charismatic, and enthusiastic young boy like Lincoln Loud yet very sophisticated and well mannered. Like his older sister, Lynn Loud II, and their eighth cousin, Lynn L. Loud Jr., Richard is also athletic and competitive. He loves to play sports and likes roughhousing with his siblings. Like Lincoln, Richard is an avid fancier of comic books and manga, and also enjoys video games. He is also a devout Catholic, sometimes seen praying and going to church every Sunday.

Unlike Lincoln, Richard is shown to make friends with a lot of people due to his wealth, popularity, his high social status, and his athletic nature. His known friends are Clyde, Veronica, Ronnie Anne, Douglas, and Rusty. He is also very good looking and handsome, which is one of the reasons for his popularity.

Richard is also the "man with the plan", as he is shown to elaborate plans with a specific objective, his plans mostly succeed since most of them are not just for his own benefit, but for his sisters as well.

Richard is also very intelligent, as he is a straight-A student, and is a responsible student.

Due to his athletic abilities, Richard can be somewhat arrogant and narcissistic, as shown when he bragged about being the best in sports and physical activities but is not too prideful to need God or Jesus.

Richard has short blonde hair with a large tuft sticking up. Like Lincoln, Richard has an overbite with a chipped front tooth, and has freckles on his cheeks. He usually wears a red and white football jacket with the letters R and W on the right side of the jacket. Inside his jacket, he wears an orange t-shirt. Richard wears blue and white track pants and white sports shoes with red stripes. When he plays soccer, he wears the same track pants but wears an orange t-shirt with white stripes. He wears an emerald ring on the ring finger of his right hand.

Richard sometimes wears a black suit with an orange necktie and black dress shoes. When he goes to a gala or a dinner party, he occasionally wears the same black suit but with a black bow tie. 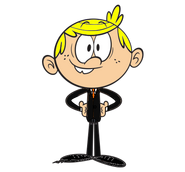 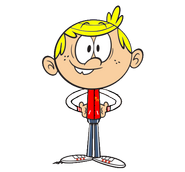 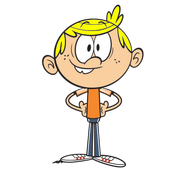 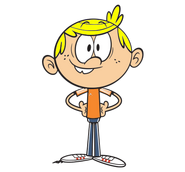 Add a photo to this gallery
Retrieved from "https://the-loud-house-fanon.fandom.com/wiki/Richard_Loud_III?oldid=27358"
Community content is available under CC-BY-SA unless otherwise noted.